A one of a kind self-certifying machine 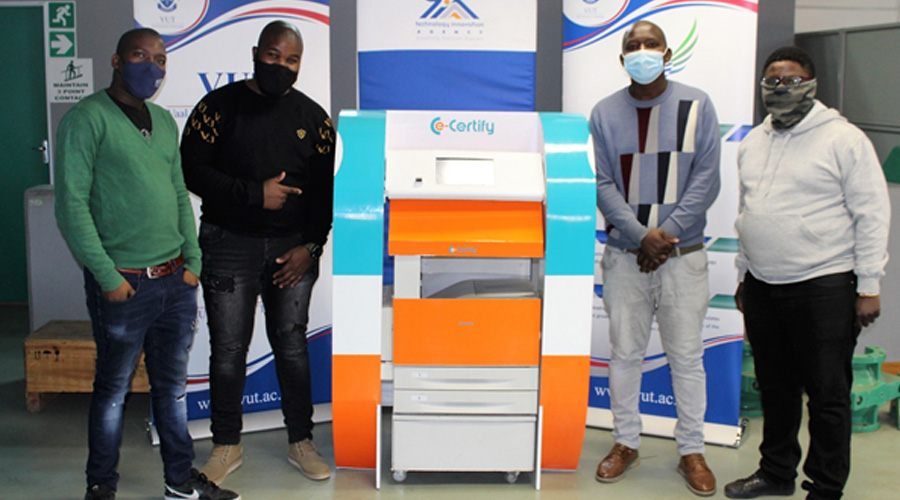 A one of a kind self-certifying machine

The Design Department at the Vaal University of Technology Southern Gauteng Science and Technology Park (VUTSGSTP) in Sebokeng has partnered with two of Gauteng’s young innovative entrepreneurs, Mr Thabang Mamantsebe and Mr Pule Maake from Ekurhuleni in designing a self-service certifying machine that is built to assist government sectors and the communities in the township in making things easier.

The E-certify (self-service certifying machine) is a product developed to reduce long queues at government institutions such as the Police Station, Post Office, etc, and reduce the risk of personal documents being stolen and later used for fraudulent means. With the high rise of unemployment in South Africa and crime being on the rise, this machine will put ease on a lot of people’s minds. The product will verify, certify, and use biometrics scans to authenticate the documents.

The machine works by first scanning the original documents to verify them, then proceed to certifying the copies. The machine will be linked to the Home Affairs department to authentic one’s identity, and will also be linked with government departments that will require one to authenticate their documents. The principal goal of the e-certify is to help the government, communities, HR management and private sectors in making sure that the documents are authentic.

Mr Thabang Mamantsebe (34) from Tembisa, East-rand is the founder of the company THABI T GROUP(Pty)Ltd. He met his Business Partner, Mr Pule Maake (27) who is the Co-founder, through his brother from Polokwane back in the year 2013. “As I presented to him my idea, he took me by surprise and said we are doing this project. Since from day one he has been my right hand man. Growing up we didn’t have much but we had the privilege of not going to bed with hungry stomachs. I can say we shared a lot in common”, said Mr Mamantsebe as he proudly talks about his partner.

The two innovative entrepreneurs started this project in 2014 when Mr Mamantsebe was still back at Denel Technical Academy, where he got his engineering drawing skills. “When I first came up with this idea I didn’t know it was going to be this big. I used to sketch a lot and that’s when I took this project very seriously and started sketching it on my computer”, he mentioned.

In 2015 he did his first provisional patent of the project which required a lot of documentation, and when he thought things were coming together, he lost his laptop and all the information he had. Fortunately, he had saved his work on cloud. Things didn’t go well when he first did his provisional patent, it was only 10 pages. His strategic business partner, Mr Pule Maake then suggested that they start having a prototype, of which they used a wire to design it.

“The project was basically started in 2014, and in 2017 I registered my company with CIPC (Companies and Intellectual Property Commission) and in the very same year I did my second provisional patent, and it was a success. The project started fully thereafter and was finished this year. “Patient is virtue as it took us eight years to finish our first project, and we are really proud of how far we have come”, added Mr Mamantsebe.

The project is funded by TIA (Technology Innovation Agency) in collaboration with VUTSGSTTP. Mr Teboho Kekana: Product Designer at VUTSGSTP worked on the product development by designing the prototype from idea to product using sketching and modelling with boxes, and Mr Aaron Malelu assisted with finishing by converting the wood to create panels and the 3D Printing was utilized for casing. All in all, CAD design software was used to develop models of the prototype for the client as well as renderings.

The two entrepreneurs thanked Mr Tebogo Kekana for introducing them to their funder TIA, which gave them a kick start in building their prototype. “Mr Kekana told us about TIA and we went straight to apply for funding as we were looking for a designer at VUT and by the grace, VUT offered to build us the prototype. We are very thankful to Mr Kekana, TIA and VUT team for making this possible”, they acknowledged.