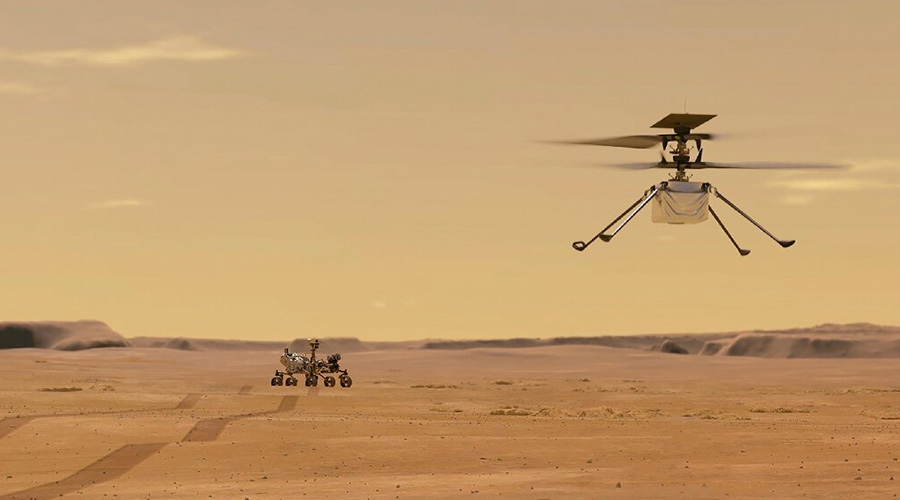 In another Mars first, NASA has successfully flown a small drone on Mars, granted – the flight was somewhat short lived and actually only lasted for about a minute in total. However, the flight was deemed successful due to the fact that “we can now say that human beings have flown a rotorcraft on another planet” albeit briefly. Since its first flight which set the rotorcraft’s flight capabilities benchmark in mid-April, Ingenuity has since completed an additional two flights over the planet’s surface capturing a selection of images and videos, with each flight pushing it farther.  Unfortunately Ingenuity’s fourth flight did not take place as scheduled due to the fact that the drone was unable to take off.

The rotorcraft is supposed to complete five flights in total, however according to the Ingenuity project management team, given that they are already trying to push the small rotorcraft to its limit in each flight, they will be unsurprised if it crashes along the way or isn’t able to complete the full five. The exercise is as much about getting new data on the planet as much as it is about testing the rotorcraft’s capabilities and limits for future exploratory flights, “We really want to push the rotorcraft flights to the limit and really learn and get information back from that” says MiMi Aung, Ingenuity Project Manager. It seems however that even if Ingenuity surpasses all expectation and successfully completes all five flights, this will still be the end of the rotorcraft’s journey, which has taken eight months so far. This is due to the fact that Ingenuity only has a 30 day flight window; thereafter a Rover by the name of Perseverance, which was responsible for transporting the rotorcraft to Mars, will take over from a planetary exploration perspective.

One of the greatest factors in getting Ingenuity to actually fly is taking the extreme planetary conditions into account. The atmosphere on Mars is extremely thin; therefore the blades on the rotorcraft need to spin five times faster than any helicopter on Earth. Each flight marks an incremental increase in the rotorcraft’s height, speed and distance with the ultimate goal of getting it to hover approximately five meters above the planet’s surface and about 130 metres in distance. The belief behind the rotorcraft is that it will be able to cover more ground more quickly and safely than some of the other crafts and rovers, and therefore able to provide sufficient data on the environment ahead of any possible human exploration. One of the Project’s executives David Lavery confirms that Ingenuity’s third flight was “nothing short of amazing” in that it demonstrates “critical capabilities that will enable the addition of an aerial dimension to future Mars missions.”