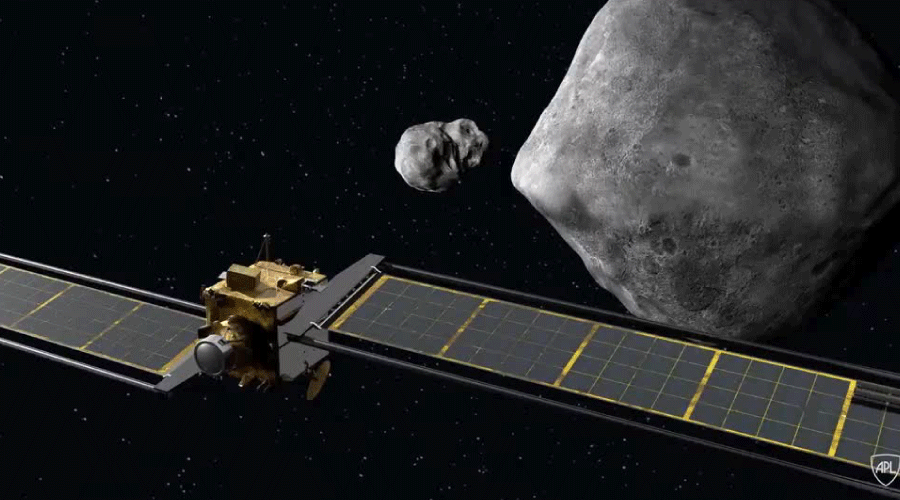 DART, NASA’s Double Asteroid Redirection Test, which is the world’s first “planetary defence technology demonstration” did exactly what it was designed and intended to do – it impacted it’s asteroid target after 10 months in space. This is indicative of DART’s ultimate goal – except on a much smaller scale. The successfully impacted asteroid is demonstrative of the technology’s targeting abilities and its future uses as a means of deterring and destroying objects that come into Earth’s orbit and risk colliding and causing damage to our planet.

“At its core, DART represents an unprecedented success for planetary defence, but it is also a mission of unity with a real benefit for all humanity,” said NASA Administrator Bill Nelson. “As NASA studies the cosmos and our home planet, we’re also working to protect that home, and this international collaboration turned science fiction into science fact, demonstrating one way to protect Earth.”

The target in question was an asteroid moonlet called Dimorphos– which is a small moon that orbits around a larger asteroid called Didymos. Both names have Greek origins with Dimorphos meaning ‘twin’ and Didymos meaning ‘two forms’. Both are well recognised asteroid bodies, interestingly though despite being the chosen target for DART, neither the asteroid nor it’s moonlet actually pose a threat to earth, they just provide good targets for DART to see how effectively it can deflect potential future threats to Earth. Dart was designed for a single trip to also test whether or not NASA could control the spacecraft and guide it to effectively deflect it using “kinetic impact.” Kinetic impact is the process sending a ‘high speed aircraft into the path of approaching near-earth objects.”

According to Lindley Johnson, NASA’s Planetary Defence Officer: “DART’s success provides a significant addition to the essential toolbox we must have to protect Earth from a devastating impact by an asteroid. This demonstrates we are no longer powerless to prevent this type of natural disaster. Coupled with enhanced capabilities to accelerate finding the remaining hazardous asteroid population by our next Planetary Defence mission, the Near-Earth Object (NEO) Surveyor, a DART successor could provide what we need to save the day.”

Now that the initial impact has been made, it will be up to researchers and many on the ground telescopes to observe to what degree the asteroid’s course has been altered by DART. These observations will assist in setting a benchmark for the prediction and modelling of future impacts and planned planetary defence collisions.