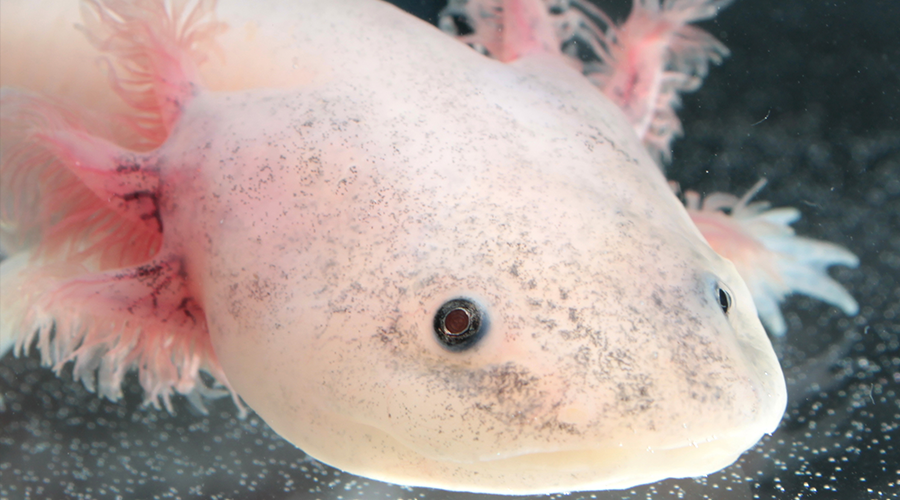 The axolotl (pronounced “ACK-suh-LAH-tuhl”) salamander is a carnivorous amphibian that is found exclusively in the lake complex of Xochimilco outside of Mexico City. At the moment it is classified by the International Union for the Conservation of Nature (IUCN) as a critically endangered species with a decreasing population trend despite its popularity as a pet, particularly in Japan. The fact that the axolotl is a common pet and is also widely distributed in laboratories worldwide is still problematic with regard to assisting its rapidly decreasing population. This is due to the fact that the gene pool represented in these ‘domesticated’ axolotls is restricted owed to the amount of inbreeding that occurs. The captive axolotls are also much more susceptible and vulnerable to natural extremities in comparison to the few that exist in their natural habitat.

The axolotl differs from other salamander species in two distinct ways: the first is that it has the “rare trait of retaining its larval features throughout its adult life” (National Geographic). This trait is called neoteny which gives the axolotl its almost tadpole-like exterior with its dorsal fin and unique ‘feathery’ external gills. The second distinguishing factor is that unlike most other salamanders, axolotls reside permanently in water and only in very rare cases do they emerge from the water and only after having matured. In terms of its size, the axolotl can grow up to almost a foot long in length (approximately 30 centimetres); however and more commonly they are half the size of that (National Geographic).

So what makes the axolotl a special species? The axolotl has amazing regenerative abilities that allow it to regenerate limbs, its spinal cord, its heart as well as other organs. The axolotl is not unique in its regenerative capabilities; many invertebrates as well as a select few vertebrates have the ability to regenerate parts of themselves ranging from skin and liver cells such as in humans, to any part of their bodies as seen in flatworms. Some animals only exhibit their regenerative capabilities until they are fully matured, such as the tadpole. However, what makes the axolotl special is that it is a vertebrate that maintains its regenerative capabilities throughout its life. An axolotl is able to regenerate an “entire limb in as little as 40 days, with immune cells called macrophages, building up tissue until a new limb is formed. As scientists are now learning, certain microRNA groups give axolotls and other salamanders this [regenerative] superpower” (Sam Schipani, The Smithsonian, 2018).

With this in mind, scientific researchers believe that by studying the axolotls’ limb and organ regeneration, it might one day open up new avenues with regard to human limb regeneration. Despite this sounding like a ‘far-fetched’ and futuristic concept, by dissecting and examining regeneration on a genetic level in the animals that have these inherent capabilities, hopefully this will ultimately bring us closer to understanding how it works on a micro level and how we can make it work for us in future.