The making of a meme 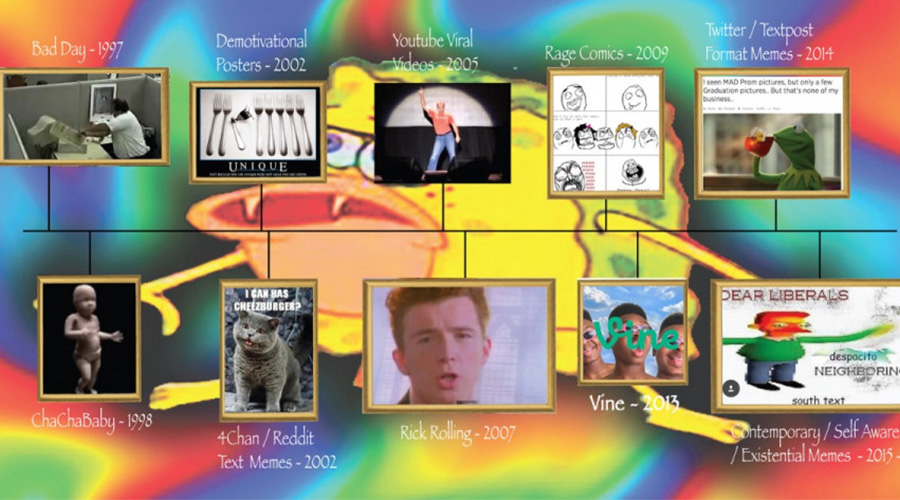 The making of a meme

These days you would be hard pressed to go onto any social media site without being confronted by a meme or two. Memes plague the internet and messaging platforms and form the core of the content published on websites such as 9gag, Reddit and 4Chan. When there is a particular image that goes viral, like a baby Yoda perhaps – or a ‘woman yelling at cat’, the meme opportunities appear to be endless, as they are captioned humorously again and again depending on what is pop culturally relevant.

It’s hard to imagine a social media scene without memes, but where did they come from and what do they mean? Semantically, the origin of the word that we now know and use almost daily is a relatively interesting one. The first use of the word ‘meme’ can be traced back to Richard Dawkins’ book: The Selfish Gene which was published in 1976. In the book, the word meme – an abbreviated form of the Greek word “Mimeme” meaning “that which is imitated” is coined by Dawkins. Arguably this is where our current day usage of the word can be traced back to – as its inherent definition is in the replication of an idea, which in essence is exactly what modern day memes are.

So how did we get from Dawkins’ book on genes to the modern day internet meme? There were a few examples of ancient graffiti that was replicated in countries across Europe, which by the definition above, would qualify as a meme – one such example is The Sator Square palindrome. In 1996 a graphic designer by the name of Michael Girard created a model of a baby doing some of the moves associated with the Cha Cha Cha. This was later modified into a GIF and circulated widely via email and by the early web. The animated “Hamster Dance” was another such example of an internet meme that went viral in the late 90s.

Since the advent of social media platforms, memes are created and shared en masse, attracting millions of views and user engagement on a daily basis – with many gaining worldwide notoriety and viral status. They are no longer focused on predominantly political or purely cultural messages, but rather on pop culture relevance. They contain sarcasm and dark humour and are for the most part relatable across many audiences. This increases the likelihood of them spreading across multiple platforms in a short amount of time. Some memes and meme ‘creators’ have become so popular, that the language depicted on the memes published have become as significant as the images themselves. One such example is 2010’s infamous LolCats memes and the language that is now termed “lolspeak” which is distinguished by simplified, improper grammar and spelling, such as “Iz ma birtday can haz cheezberger”, which for inexplicable reasons is absolutely endearing and the internet seems to absolutely adore it.

We may not always catch the significance or meaning of certain memes at first, but you can rest assured that there is a meme for every mood or occasion just waiting to be shared, and hopefully get a few ‘lols’ in the process.