The many moons of Jupiter 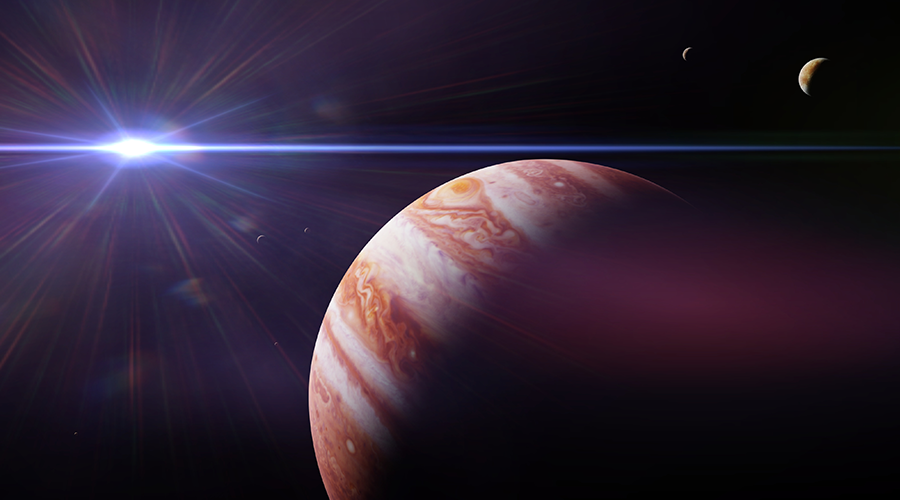 The many moons of Jupiter

Jupiter is one of the most renowned planets in our solar system, often attributed to the fact that it is also the largest one in the solar system. It is the fifth planet from the sun, and although it is only one-thousandth the size of the sun, it is almost two and a half times bigger than all the other planets in the solar system combined and is therefore classified as a giant planet. To put things into perspective size-wise, it would take eleven Earths to fit across Jupiter’s equator (NASA). In 1979, it was discovered that Jupiter has a faint ring system around it, which means that all four giant planets in our solar system all have rings. Jupiter is classified as a ‘Gas Giant’ as its atmosphere is largely comprised of Helium and Hydrogen and has therefore been determined unlikely to be able to support any kind of life form as it doesn’t have an “earth-like surface” (NASA). Also, the length of a year on Jupiter is equivalent to 4,333 Earth days.

There have been nine spacecrafts that have visited Jupiter, the majority of which have just passed by, while two have orbited the giant planet, the most recent one being Juno which arrived at Jupiter in 2016. It was Galileo Galilei that first discovered that Jupiter had its own moons in 1610, these were the first moons to be discovered past Earth’s rotating moon. Most recently in Jupiter’s planetary discovery history, scientists have uncovered the existence of twelve new moons orbiting the planet. The discovery of the additional moons has brought the total number of moons observed orbiting around Jupiter to a grand total of 79, which is currently the most out of any planet in the solar system. Fifty-three of these moons have been confirmed and officially named, with the outstanding moons still to be verified. The discovery of the twelve new moons was accidental but fortuitous as scientists were initially looking for a planet which they believed to exist on the “fringes of our solar system” (National Geographic, 2018).

The finding was entirely unexpected and “fascinating” as planetary scientist Doug Hemingway terms the discovery: “This is a great reminder that when you build up the capability to study one thing, you never know what else you might discover along the way”. It is thought that two of the newly discovered moons are remnants of a much larger moon that has been broken down over the years. Valetudo is the only one of the dozen to have been given an official name so far, its mythological significance is that it is named after the Roman goddess of health and hygiene.

It is evident that with the happy-accident discovery of Jupiter’s additional twelve new moons, our continued exploration of our immediate solar system brings about new findings and an even greater understanding of just how unique our own planet is.